how does 1 bitcoin/dollar/euro/etc get to be more “valuable” than 0.5?
there are 2 0.5 in the 1 – but 1 is more valuable than the 2. If we had voting like that then 1 person’s vote could be more than 2’s votes.. (assuming they happened to vote for 2 different parties. Also if they voted for one, the de-facto value of 1 is more than theirs..)

But back to numerical exchanges..

For 1 to be more valuable than 2 0.5’s we also need a few other elements:
there should be less 1s than 0.5s.
the relative scarcity of 1s within a system makes an element more desireable. but here comes the really twisted fairness of numerical sequences of exchange:
for 1 to have more value, it requires more people to want 1 than people who have 1. Its not a systematic question of altering mechanisms, its a question of the sequence that makes numerical exchange Be as it is, sense life as it does. Its the art of numerical exchange sequences.
I have 1, and for 1 to have more value than 0.5 there has to be more elements that fancy 1 than elements that have 1. To ensure the sequence is not challenged, there are system of power in place..
In my view, bitcoin does not alter that, its just offering a different way to maintain and develop economical in equalities..

In this aljazeera show re capitalism recent performance, there is a guy from lse that basically says something like:
The “financial crisis” couldn’t have been forecasted because “the economy” is so complicated – its very hard to tell. There are so many elements involved in economic exchanges and behaviours, that its simply impossible for us economists to tell what might come.
As he was saying that, did he not also, in effect say other stuff as well?
eg:
that economists like him are perhaps not in a position to understand their subject?
that indeed, stock exchanges are just a gamble, but because it is a dignified gamble then gamblers should be protected if they actually lose gambles too much?
that indeed economists are very clever – they can say that they are clueless in a cluelessness inducing line of work, yet somehow the rest of society is actually listening to their ideas re economic matters. A bit like going to a dentist that will tell you they are actually plumbers with a bee keeping hoby that like to pretend from time to time they do dentistry, and you go: Sure! That’s cool. So tell me, why my mouth hurts so much? 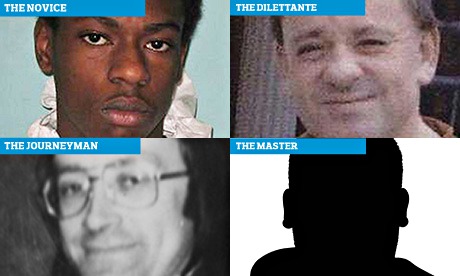 well.. seems like there are people desperate enough to kills, pay and get paid for killing others – and they are not just in the armed services..

The bram uni survey seems very interesting indeed even if only the subject – contract killing – is both sort of taboo and subject to much mythologising via games, movies and books, as the article keeps comparing to these..

Perhaps could be interesting, though not that relevant(??) to compare price of human lives to economic situation.. Just wondering if this contract killing business is one un calculated cost of, errr, capitalism..?

Might also be cool to add in the amount – amount? why quantity rather than quality – of cultural production linked to contract killing, check links with economic questions, etc..?

Illogicality, in general, doesnt seem like a bother, in fact it seems that life – or even being – is not entirely logical. To use oxygen, we need to burn, a process that in itself isn’t danger-less.. Might have been more “logical” to have a different approach.. (illogicality – hence many people might have difficulty accepting anarchic & evolutionary processes..?)

Hypocrisy, in very simple terms, is in my mind when an entity changes what they say and do according to their interests. You shouldn’t have cocaine, but its fine for me because, err, i am responsible and you aren’t. Or, you should tighten your financial belt, but I can not do that because errrr I am richer than you anyway..

When am thinking one thing is there/being/true, but it isn’t, I guess, that that is a sort of fallacious thinking. If I think that if I aked you to get me some bread, you agreed, and I expected bread rather than the dead rat you brought – I might have had a fallacious thinking of expectation. Or, if I thought that X place is to the north of me, when it actually was to the west – it can be argued that I had a fallacious sense. However, there are slightly more structural/innate kind of fallacies. eg, Might is right. Or, that if many people agree to X being true – then it must be true, etc..

So.. After all that intro..

When people/new-liberal/washington-consensus/capitalists say stuff to the effect of:
Economy is a game theory science with predictable models, universal disprovable axioms, and the capitalistic economic model – as harsh as it might be at times – is just the way nature/science shows economic practices should be. (hence attempts to “disturb” these processes are wrong from the outset, against economic nature..)

Now, how should the call for fairness in capitalistic economic activities
be taken in this context?
eg
fair pay – 1. as if money is a fair way of sharing and providing economic awards & rewards. 2. that there are certain fair/un-fair numerical awards/rewards that can be given to people. (eg some pay is too much, or too less..)
basic income – it will be fairer.
times are hard – so lets al tighten belts, its only fair..

If indeed, the new-liberal/washington-consensus/capitalist economic practices are just the way things should be – then surely, fairness doesn’t come into this?
eg, if the sea is wet -0 eg if capitalist economy is natural – there’s nothing we can do to change the wetness nature of the sea, right?
It is just an if A = B. If 1 = 2 / if dark = bark etc. If economy = tough-rides.

In that sense, is it not the case that if they are correct regarding the nature of capitalistic economy, then fairness doesn’t come into this? In a sense, because fairness in that case, is supposed to be integral to the economic cycle A constitutive element of it (eg reform of financial institutions, usage of interest rates to divert economic activities this way or another) – then even arguing that fairness is about mitigations of the hard times – is either hypocritical, fallacious, or logically flawed..?

Cult of the Amateur?

Toward a generative economy